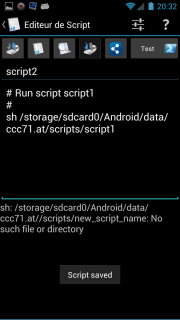 This screen allows you to create and edit a script. An external script or any of the existing script from the Scripting screen can be added within the edited script.

Script can also be tested before saving, splitting the edit screen in 2: edit / output of the test. Tapping the output closes it.

Here is the list of buttons behavior from left to right:

Not enough information? Please suggest improved/new/updated content e-mailing me the current URL and content you need to get improved/updated.